Pianist Robert Palmer’s career spans three continents, with solo, orchestral and chamber music appearances throughout the United States, Europe, and Asia. Following his critically-acclaimed Carnegie Hall debut in 1979, Palmer embarked upon a performing career that brought his artistry to many of the major concert halls of the United States and abroad.  His performances have been broadcast on National Public Radio and public television in the United States as well as in China, Japan, Korea, Spain and Taiwan.  Palmer has been presented in recital by Community Concerts, a subsidiary of Columbia Artists, and he continues to perform regularly throughout the United States, where he has been heard in virtually every major city including several recitals in both Carnegie Hall and Steinway Hall in New York.  He has made eleven tours of Asia, with solo and concerto performances in the metropolitan centers of Osaka, Seoul, Shanghai, Taipei, and Tokyo.  As a chamber musician, Robert Palmer has been heard in recital with musicians from the Paris Conservatoire, the Metropolitan Opera Company, the Montreal Symphony, the New York Philharmonic and the St. Paul Chamber Orchestra.  He has been a member of the American Piano Trio since 2000.  His most recent CD’s include a solo recording titled The Romantic Spirit and a collaborative CD with cellist MihaiTetel. Robert Palmer enjoys a highly successful teaching career and is widely sought after as an adjudicator, artist-in-residence, clinician, lecturer, and presenter of master classes.  His students, prize-winners in national and international competitions, hail from throughout the United States as well as Argentina, China, Hungary, Japan, Korea, Mexico, Romania, Russia, South Africa, Sri Lanka, Taiwan, and Thailand.  Palmer has appeared on the summer faculties of the ARIA international music festival and the RencontresEstivales au Moulin in France.A graduate of the Peabody Conservatory of Music and the University of Minnesota, Palmer’s many awards include prizes in the Joanna Hodges International Piano Competition and the United States Information Agency National Piano Competition.He is the Mauzy-Porter Distinguished Professor of Piano at Ball State University, where he has served on the artist-faculty since 1986.  Robert Palmer is a Steinway Artist. 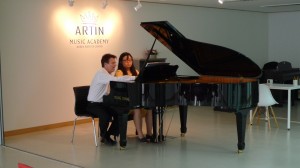 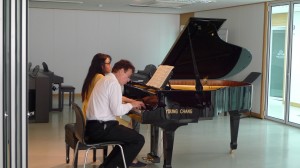 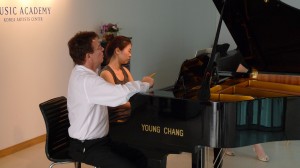